For some reason, the International Bank of Azerbaijan (IBA) is known in some circles as the “bank of the president.” For many years, this very bank has guarded its status as the biggest bank in the country (although the state holds a controlling interest in the bank’s shares the state). While analyzing the companies that own shares in the bank, it becomes clear that it cannot be explained solely by the fact that the Ministry of Finance is the bank’s main decision-making body, and that large government projects are funded by generous loans with low or no interest. The analysis confirms that at least three companies that are close to president Aliyev own shares at the International Bank of Azerbaijan. This year, a startling development has taken place in the bank’s equity capital: shares owned by those companies have “melted”.

The International Bank of Azerbaijan has never listed its shareholders by name when releasing their reports and stock issue announcements, but instead as legal and physical entities. That is why the parties controlling its capital and management have been completely hidden from the public until the beginning of 2017.

It should be noted that, in the period of 2002-2017, IBA’s paid shareholder capital increased from just over 6.8 million AZN to nearly 1.25 billion AZN. The fluctuation of the state's share in 2013-2017 is closely linked to this rapid growth.

93 million AZN worth of shares owned by companies and individuals

The financial and management reports for 2014-2017 do not include the shares owned by private companies, including those belonging to bank employees and other private individuals. Another point worthy of attention is that the state's stake in the bank rose from 51% to 91.4% during that same period - significant gains made at the expense of the private sector. This was due to additional stock issues, as well as the transfer of stock shares from some large shareholders to the state. According to the information for the beginning of 2017, the bank withdrew shares worth a total nominal value of 16.8 million AZN (1.35%) from shareholders, whose names are not disclosed.

The IBA’s 2017 management report indicates that the state-owned 91.38% of the nearly 4.6 billion shares in circulation. The remaining 8.62% of shares were divided among 12 legal and physical entities. According to the results from the first half of this year, the most significant change in the structure of shareholders was a significant share transfer from the state-owned Aqrarkredit CJSC to the Finance Ministry. The shareholder structure of the bank that was disclosed on October 1 of this year confirms that there is a significant change among the minor shareholders.

The shares of the shareholders were listed based on shareholder categories (state, private companies, and individuals) in the issue prospectus regarding the stock issue from the end of 2016, worth some 600 million AZN. As a result, for the first time, the names of the shareholder companies and the number of their stocks became public. According to the document, before the stock issuing, there were 8.04% (190.9 million shares) of the IBA shares in the possession of 12 legal entities; afterward, this percentage was cut in half. At that time, shares held by legal entities in IBA were worth 51.5 million AZN at face value (27 cents). As for individuals, their shares fell from 6.2% to 3.2% as a result of the issue of additional shares (to 39.7 million AZN at nominal value). In January of 2017, after the issuing ended, Azerbaijani citizens held 147.1 million shares in IBA. So, local companies and individuals had 92.9 million AZN worth shares in the bank. 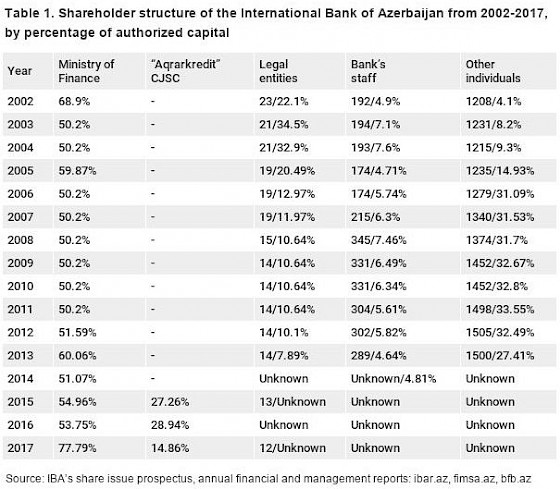 Over the past 19 months, it has been noted that, in terms of the structure of the private capital, there was a flow away from legal entities towards private individuals. The analysis shows that, at the beginning of October of this year, shares in the bank, worth 51.5 million AZN, belonging to non-state companies fell to just under 3.84 million AZN (0.31%). The shares of individuals increased from a little over 39.7 million AZN to just over 55 million AZN (4.45%). Now, the State Committee on Property Issues ( and 3.76% in equity, amounting to 46.6 million AZN) is among the shareholders as well. However, the names of the companies that own shares in the bank are not disclosed. The question remains: which companies were the shareholders of the bank in the past?

There are companies of Pasha Holding in this address

Both companies are taxpayers on the rolls of the National Revenue Department of the Ministry of Taxes. But their state registry information is kept secret. This is contrary to the law "On State Registration of Legal Entities and State Registry". Since no disclosure has been made, for example, it is not clear when these companies were founded. There is the only a single source that sheds light to their origins.

Are there opportunities for new investors?

A year ago, three companies each possessed an equal amount of shares (737.7 thousand AZN at face value): "Rashad-Q" small enterprise (TIN: 7700183111), "Ocaq-5" firm (TIN: 1700108781), and "Aqat" company (TIN: 1700108781). In the report, the shares held by Arsenal-MM amounted to 805.5 thousand AZN; Improteks LLC, (TIN: 1300059531) 1 million 186.4 thousand AZN; and Employees of Local Industry and Communal-Housing Institutions of the Republic of Azerbaijan Union (TIN): 2300462181) declared shares worth 135,000 AZN. "Bakelektroavtomat" OJSC, Commercial Bank of Bank of Baku and TT Company (TIN: 1301033611) were represented in the bank with just a small share. At present, the list of companies and organizations owned by legal entities, whose combined stake in the bank totals to stock worth nearly 3.84 million AZN, is not publicly available. The Bank’s press service refuses to share the number of companies that have protected their shares in the bank.

While the purchase and sale of shares in the International Bank of Azerbaijan are usually registered at the Baku Stock Exchange at a nominal price, the actual market price varies between 15-16 kopecks, depending on the size of the stock; as the number of shares offered for sale increases, the buyer demands a lower price.

Although the government announced its plans to sell its shares in the International Bank of Azerbaijan in 2005, they never followed through with this plan, once the bank’s financial situation stabilized. Privatization has come to the agenda again in 2015 after IBA became, for all intents and purposes, financially insolvent. It is unclear at what price range and percentage the government-owned portfolio will be offered to investors at, during the initial stage of the sale. There is also no information on the selection criteria for the investors.

It should be noted that, in its Transition Report on Azerbaijan, the European Bank for Reconstruction and Development (EBRD) recommends that the IBA be privatized without delay in 2019.