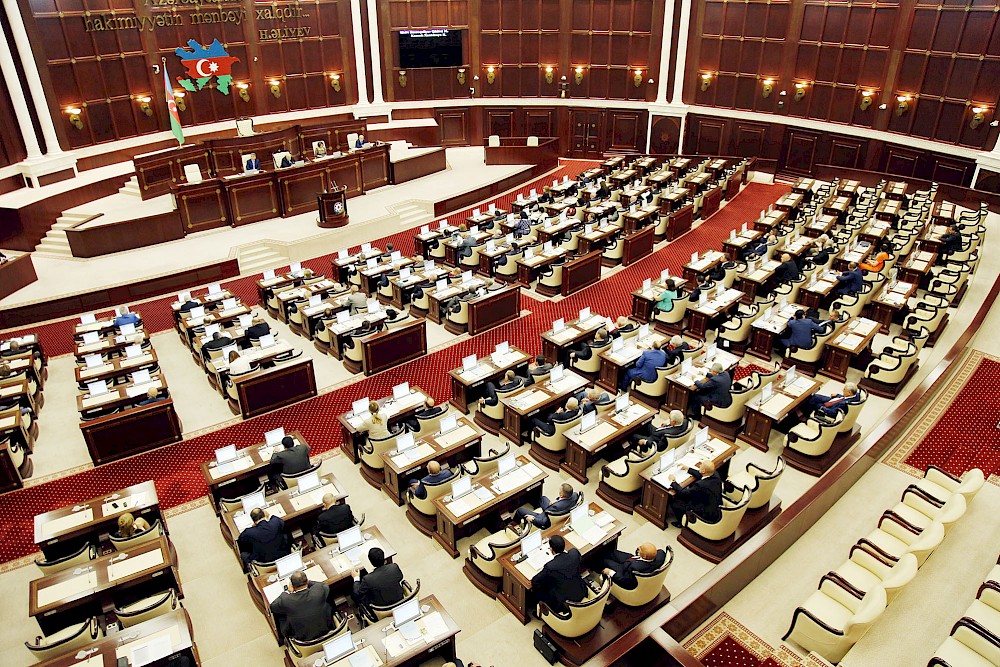 Debates over the 2017 state budget of Azerbaijan will soon start in National Assembly. According to the legislation on Budget System, the draft budget act of the following year is presented to National Assembly no later than October 15.

Parliament is an important institution providing control over the financial activities of the government. However, the level of participation of the parliament in budget processes varies significantly in different countries. As a rule, in democratic societies the influence of the legislative bodies over budget decisions are strong and such influence mechanisms carry a rather formal function in authoritarian countries.

Currently, such functions as the approval of the draft budget act, control over the implementation of the budget and hearing the report about its execution belongs directly to the parliament in any developed and developing country of the world. The approach is the same: the executive power presents the financial resources that it will need to perform its functions in the upcoming period in the form of a draft budget act to the legislative power, the latter debates and approves the document, monitors the implementation of the budget during the fiscal year using the audit organ it has formed and finally, at the end of the year inspects the budget report of the government. However, according to the research studies, the similarities of the procedures carry a formal character in many cases and the influence of the parliament on budget decisions differ significantly from country to country.

As a whole, the efficiency of the budget authorities of the legislative body is assessed based on several criteria in the international experience and one of such criteria is the duration of the parliament’s budget debates. According to the recommendations of Organization for Economic Cooperation and Development (OECD), the parliaments should be given sufficient time for budget debates and this period should not be less than a month in any case. According to the experts of the organization, the duration of the discussions is considered an important criterion for a deep and effective analysis of the budget.

In Azerbaijan, the period of the Parliament’s budget debates is very short. The practice of the past years shows that the consolidated budget documents are discussed in the commissions of National Assembly in two meetings and the maximum duration of each meeting is 3-4 hours. After this, at the best case, they are discussed at three plenary sessions of the Parliament and the duration of each of these sessions is 4 hours. In other words, the draft of the consolidated budget for the next year consisting of big documents is discussed in a total of 18-20 hours in the Parliament.

However, the legislation allows extending the budget discussions of National Assembly up to 2 months. First of all, let’s pay attention to the parliamentarian authorities in the legislation regarding the budget. According to the Article 95 of the Constitution of Azerbaijan, approving the state budget and control over its implementation is an authority of National Assembly. In its turn, according to the Legislation on Budget System, the draft law act about the state budget for the following year together with other documents attached to it is presented to National Assembly for the parliamentarian discussion and approval no later than October 15 of the current year. However, the problem is that this law does not regulate the characteristics, procedures and other details of the debates and leaves these issues to the Internal Regulations of National Assembly. The experience of the past 15 years shows that benefiting from the legal possibilities of the Internal Regulations, the administration of National Assembly completes the debates of the budget of the following year in the first reading and confirms it in the second reading. So far, we have not seen a case when the state budget of Azerbaijan would be discussed in three readings. However, many other laws in the country are confirmed after three readings.

Another problematic side in this topic is that National Assembly does not allow public participation in budget debates. Experts of the opposition and civil society are not invited to such discussions, and their opinions about the draft budgets are not heard.

In the experience of several developed countries and countries targeting development, a special attention is paid to the durations and maintaining public participation in budget debates. For example, in Georgia, the President of the country must present a document named “Base information and directions of policy” to the Parliament by May. This document is sent to the Parliament, not with the purpose of being approved, but rather to inform the parliamentarians and to start consultations about the draft budget act. The Financial Committee of the Parliament organizes a hearing to discuss the document. Concluding the hearing, a review containing the comments and proposals that reflect the position of the Parliament is addressed to the country President. After this, the parameters of the budget are revised considering the reviews and notes of the Parliament, and draft act are presented to the Parliament no later than October 1. As you can see, in Georgia the Parliament is involved in the budgeting processes before the plenary session discussions of the draft act. Budget requests are approached with sufficient responsibility and professionalism (by ministries and other high state institutions that receive budget funds). The reason for this is that every institution must substantiate its activities plan and expenditures related to the legislative body. All institutions bring their PowerPoint presentations with detailed information about their budgets to the attention of the parliamentarians. The Parliament has three months (October, November, December) for discussing the budget draft. The draft is approved by the Financial Committee of the Parliament.

Within two days after the approval of the draft by the Committee, the Speaker of the Parliament holds a meeting with the representatives of all fractions, minority, and majority groups and discusses the document with them. Following this, all Committees of the Parliament discuss the draft budget and send their recommendations to the Financial Committee. Finally, the Cabinet of Ministers brings the new draft budget act, in which the recommendations of the Parliament have been considered, to a discussion with the legislative institutions no later than November 1. The project must be discussed in five days. The government officials write down all their notes about the recommendations of the parliamentarians and present to them. In order to make the existing legislative discussions more effective and to maintain that the parliamentarians have more chance to speak, a limit on the speeches of the legislative organs is also defined. For example, according to the document “about the Procedure Rules of the Georgian Parliament”, the government representatives have 30 minutes, and the representatives of the Financial Committee have 60 minutes of speech time in the plenary meeting devoted to the discussions of the budget.

The Committee of Financial and Economic Affairs of the Parliament (Storting) plays the main role in organization of the parliamentarian budget discussions in Norway. The draft budget act enters this committee in early October. Following this, the aforementioned committee organizes budget discussions in other committees of the parliament. The durations of the debates are strictly regulated. The shortest debates last for 4-5 hours and the longest for 9-10 hours.

Sometimes 2-3 debates with the participation of various audiences are organized in one day. In total, more than 50 budget debates with the participation of different stakeholders are sometimes held in budget discussions period. These debates are organized both by the Parliament administration and the Committee of Financial and Economic Affairs and in such meetings the roles of speakers are given to the guests invited from civil society organizations, academic societies or lobby groups. The Parliament must prepare and send its recommendations regarding the draft budget to the government by November 20. The Norwegian Parliament possesses extensive resources for organizing budget discussions. Thus, besides the professional consultants of the legislative body, each committee has their own permanent secretary representing the experts of the committee. On top of this, a special research committee within the Parliament has been operating since 1999.

Regulations about budget discussions are directly reflected in the country’s constitution in Estonia. Pursuant to the Article 115 of the Constitution, the draft budget act must be presented to the Parliament no later than October 1 and be confirmed by the beginning of the following fiscal year. The Budget and Tax Committee of the Parliament regulates budget debates. In order to increase the awareness of the Parliament members on budget debates, three people carry out analytical work at the Committee.

According to the law on State Budget, the draft budget must be discussed in three hearings. Prior to the first reading, a budget debate is organized at the Parliament with the participation of all stakeholders and the participants of the debate get the chance to receive detailed information about the contents of the draft budget act. Following this, the draft budget is discussed in the plenary meetings of the Parliament in three months. The discussion of each hearing usually lasts more than one week. At the first hearing (as a rule this stage takes place in October) the Ministry of Finance give a speech that contains an extensive amount of information about the main principles of the compilation of the draft budget act, the general state of the country’s economy and the main goals of the government. At the end of the first hearing, the committees and fractions give their recommendations regarding the draft budget. During this period the Financial Committee organizes numerous budget hearings, in their turn many ministers and the head of the Central Bank are invited to these events.

Detailed discussions are carried out in the second hearing. At the same time, the attitude of the government to the recommendations and proposals that were raised in the first hearing are clarified. The second hearing is the last chance for the parliamentarians to present their proposals. After this stage, the document is returned to the government and it is approved during the discussions of the third hearing.

Generally, if we talk about the positive international experience, it is necessary to make several steps to increase the efficiency of budget discussions in the Parliament of Azerbaijan. First of all, it is important to provide participation of National Assembly during the preparation stage of the draft budget act. This is at least important for the parliamentarians to deliver the needs of their voters to the legislative bodies responsible for compiling the budget. Secondly, it is necessary to present the draft budget act to the Parliament no later than October 1. This would contribute to the legislative body to collect some more detailed information about the budget and to maintain more effective control over the implementation of the approved budget. Third, the draft budget act must be discussed in three hearings, at the same time the minimum allowable number of plenary meetings considered for each hearing must be defined by legislation. This would allow discussing the budget in more detail and in accordance with various parameters (organizational, functional, programs etc.). Fourth, precise legal norms and procedures must be reflected in the regulations of budget discussions on the committees of National Assembly. These norms are important in order to define the duration and character of discussions. Finally, involving civil society to budget discussions and the organizational procedures of budget debates must be reflected in budget legislation in detail.