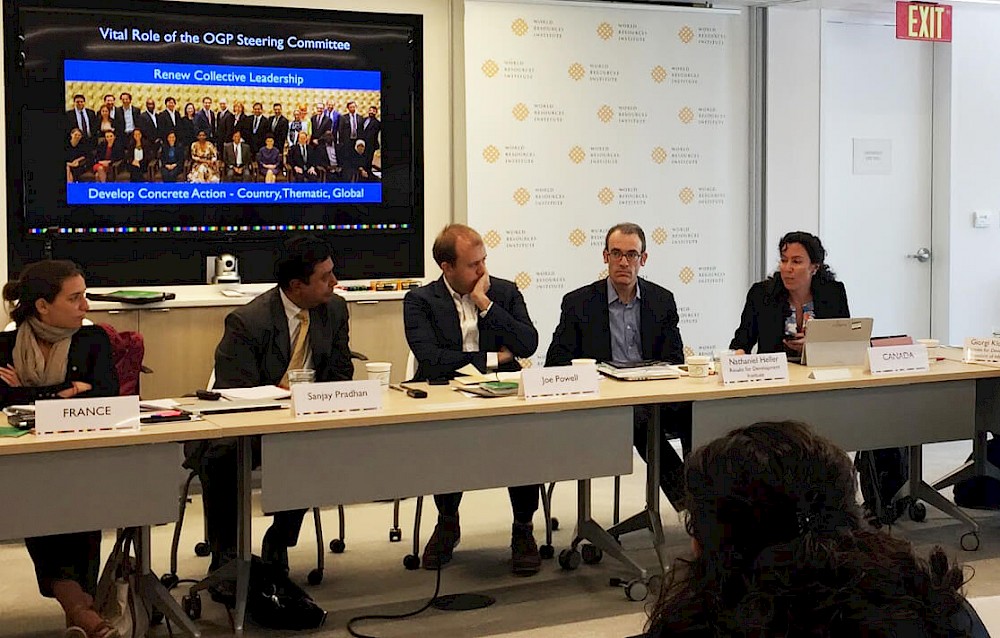 In 2014, legal and practical steps were taken to shrink the normal operating space of the civil society in Azerbaijan. In response, a number of international NGOs sent a letter in 2015 to the Open Government Partnership (OGP), of which Azerbaijan is a member. In this letter, they spoke about problems faced by civil society in Azerbaijan and grievances of various organizations and requested that OGP reconsidering membership status of Azerbaijan in the organization. The OGP Steering Committee took into consideration the report of the fact-finding mission it sent to the country and made the membership status of the country inactive for a year, starting in May 2016. In 2017, this was extended until September 2018; at each stage, Azerbaijan was provided with updated recommendations. The issue of the membership status of Azerbaijan to the OGP was discussed at the Steering Committee meeting, held in Washington DC on 5-6 December 2018, and the document regarding the final decision was revealed.

The Azerbaijani Government does not implement fundamental reforms

In this document, the OGP Steering Committee appraises some positive decisions made by the Azerbaijani Government; for example, the establishment of an electronic service platform based on the “one-window” principle for the registration of NGOs was evaluated as a positive step. But it is also underlined that the main problems, which led to the suspension of the country’s status in the OGP, still remain. The decision mentions that the main issues presented by the civil society organizations and raised in the Response Policy letter (approved by the MS subcommittee of the OGP) have not been solved. Evaluations conducted by both the OGP and third-party, independent experts demonstrate that, during the past 12 months, some limited improvements in the working conditions of civil society have been witnessed, but the government has failed to implement systemic changes or reforms, which would have thoroughly and fundamentally executed the updated recommendations given by the MS subcommittee.

The progress report sent by the Azerbaijani Government to the OGP on 7 September 2018 talks about one-window e-service platform to further simplify procedures regulating the operation of NGOs, as well as a digital platform that includes all NGOs and relevant state bodies. It is noteworthy that the OGP Steering Committee evaluated this as a step forward in its latest resolution on Azerbaijan. But the simplified procedures of online registration of NGOs has not been solved in the Law on State Registration of Legal Bodies and State Registry or in practice.

All NGOs that consult the OGP noted that two issues reflected in the updated recommendations remain as significant problems for the civil society. These are issues related to registration and financing of NGOs. Bureaucratic procedures for the registration of NGOs, the receipt of grants from foreign donors, the registration or authorization of grant projects in the Ministry of Justice and other executive structures, depending on the topic of the grant, are still being implemented.

OGP came to one general conclusion: despite all the difficulties faced by NGOs, attempts to ensure a dialogue between civil society and government in Azerbaijan shall continue.

Taking all this into consideration, the OGP Steering Committee first decided to extend the suspended membership status of Azerbaijan, sufficient to cover the implementation of a full action plan. At the same time, it called on the Azerbaijani government to implement a number of measures in stages, in order to restore its full and active membership status. These are the following stages:

(1) Prepare a road map to design an Action Plan of Open Government for 2019-2021. The Road Map shall be prepared by 1 March 2019, and be in line with the minimum requirements of the OGP Participation and Co-creation Standards. The Map shall also cover procedures for engaging interested parties outside of the Forum, in order to involve them in the process of joint preparation of meeting times and action plans. This road map shall be published by the government and presented by the aforementioned deadline to the co-chairs of the MS subcommittee.

(2) Assignment of a high ranking official (at the ministry level or higher) to lead Azerbaijan in the process related to the OGP. This appointment shall take place by 1 June 2019.

(3) It is envisaged to involve civil society circles outside of the Open Government Forum in the preparation of the plan. Along with that, reforms shall be held for the purpose of eliminating restrictions to the work of civil society reflected in recommendations and country-specific priorities of OGP.

(4) Finalize the open government action plan, officially adopt it, and present the final version to the OGP Support Unit. This shall be completed by 31 December 2019.

(5) Complete the implementation of the Open Government Action Plan by 31 August 2021. This action plan will ultimately be evaluated by independent experts within the framework of the OGP Independent Reporting Mechanism.

If the Azerbaijani government take the first steps...

If the MS subcommittee concludes that the Azerbaijani Government has solved the main problems related to civil society at any stage of the action plan, it will immediately request that the Steering Committee restore the active status of the country.

Despite having suspended status, Azerbaijan will continue to receive technical assistance from the OGP Steering Committee and Support Section and IRM will evaluate the future action plan of the country.

While the suspended status of the country continues, Azerbaijan does not have the right to vote in the elections to Steering Committee and can only participate in OGP events for learning updates, as an observer. Azerbaijan’s suspended status will be reflected on the website of the OGP and it's public information materials until the end of the process.

It is noteworthy that the status of Azerbaijan, which was previously “inactive”, was presented as “suspended” in the final resolution of the Steering Committee on Azerbaijan. This is the first such example in the practice of cooperation.

Under what circumstances can Azerbaijan be expelled from the OGP?

If the decisions and dates related to Azerbaijan reflected in the recent decisions of the OGP are not observed at all, response policy procedures will be automatically completed (procedures commenced in 2015, which envisages a regular consideration of the status). Ultimately, this would lead to the expulsion of Azerbaijan from the OGP. Cancellation of membership and permanent expulsion from the organization shall continue until proof of the 2017 recommendations being adopted by the OGP being implemented by the Azerbaijani Government is presented. This proof would need to be examined by foreign experts and approved by the OGP Steering Committee.

Finally, the OGP Steering Committee upheld the suspended membership status of Azerbaijan through 2019. Restoration of active membership will depend on the fulfillment of demands for the preparation of a road map, the appointment of a high-ranking official, and the adoption of the open government action plan in March, June, and December of 2019, respectively. Simultaneously, the recommendations of the OGP on working conditions for civil society adopted in previous years shall also be observed. The Azerbaijani Government shall improve the dialogue atmosphere with civil society in the country, not only to restore its status in international organizations like the OGP but for the general institutional development of the country. Simplification of registration procedures for NGOs, their projects, and the operation of foreign donors in the country are the first steps to be taken.