FIGHT AGAINST DOMESTIC VIOLENCE IS ONLY IN WORDS 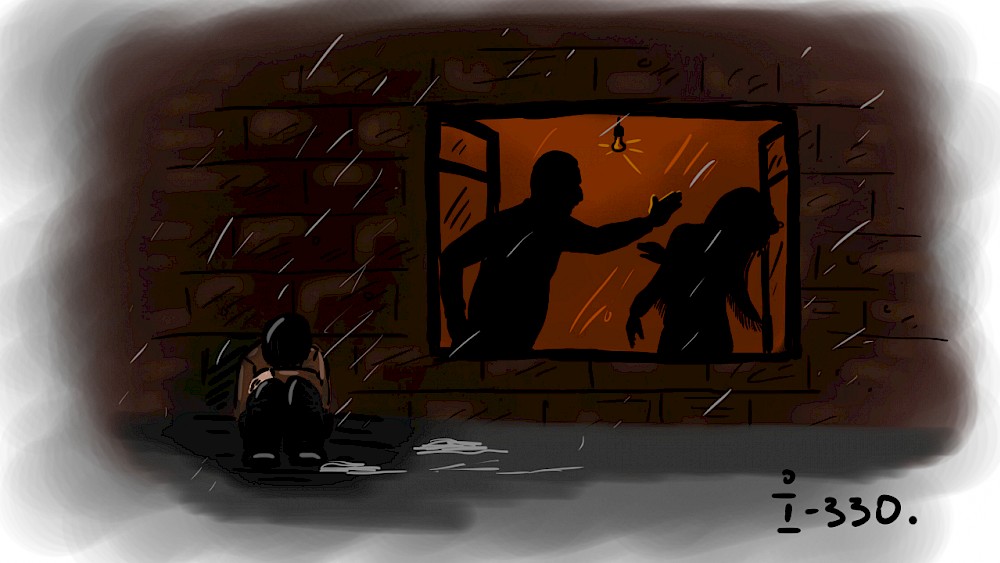 There is an idea in Azerbaijani society that, despite the existence of a sufficient legal foundation to combat domestic violence, local mentalities and a lack of official complaints about domestic violence hinders the application of the law. In other words, the reason that the rights of the victims of domestic violence are not being sufficiently defended is not the absence of legislation, but rather its improper and insufficient application. Along with believing in the importance of improving the legislation, many people think that public awareness should be strengthened, instead of toughening punishments.

There are issues in many aspects of the domestic violence situation in Azerbaijan. Legislation alone cannot solve the issue. The effectiveness of the legislation is measured by the extent, to which the laws provide an opportunity for establishing effective protective institutions. In 1995, Azerbaijan joined the UN convention on the “Elimination of All Forms of Discrimination against Women.” In 2001 ratified the “Facultative Protocol” of that convention; according to Article 2 of this convention, one of the obligations of the government was to create an effective legal foundation to ensure the effective protection of women from discrimination. However, the legislation created on the basis of these obligations does not generally cover the norms (imperative norms, sanctions, and so on) that would provide effective protection.

Another issue arises from the fact that there is no point in strengthening public outreach to explain these inconsequential laws if said laws do not authorize strict measures of punishment. There is no need to conduct a public awareness campaign on a law that is not able to actually ensure protections for women. The lack of protection is not due to women not using their right to complain to police, but actually that the police and other investigative bodies do not provide sufficient assistance to the women (provision with shelter, arrest of the individual that has committed violence, and so on) or they do not pursue any meaningful investigation into the matter.

And so, many questions remain: if the legislation was indeed well-designed, then why are these measures so ineffective in the fight against domestic violence? Why are the women who complain to the police not provided with sufficient protection and, this being the case, why would a woman want to go to the authorities at all?? Even if a woman were to go to the police, why does the process so often result in the victim withdrawing her complaint without any action being taken?!

If domestic violence is not considered a social issue?

One of the difficulties of fighting against domestic violence in Azerbaijan is the public’s rejection of this issue as a social issue and perceiving it as normal behavior. In countries with patriarchal systems, domestic violence is justified as a method of nurture and upbringing. Violence is perceived as a form of education that aligns the behavior of women to the “desired” rules of behavior since women and children are seen as “property.” If a man has total authority over women and children, then he thinks that he bears responsibility for every “wrong” action they make. He thinks the method for not having the wrong behavior repeat itself is “nurturing”, which means men are “obligated” to use violence. There are many who accept this as normal behavior. We encounter these people daily, from every social class, economic background, and walk of life. These people do not accept that this behavior actually stems from their attitude towards women and children as their property.

For the government, the dispositive norms (the capacity to act as alternatives) that protect the right to equality are available in all areas. When it comes to violence, the legislative body can adopt a law, under which the government would not perform the function of oversight and execution, but rather act in the role of “guardian”, in an advisory function. It is not a coincidence that law enforcement bodies, when reporting on criminal acts, characterize those acts as “a criminal act that took place within a conflict in family life,” instead of using “domestic violence” terminology. According to the State Committee on Statistics, in 2017, there were 1225 recorded criminal acts of domestic violence, with 977 of them being criminal acts involving intentional, minor bodily harm. Although the accuracy of these statistics is questionable, the high number of criminal acts in one year is a strong indicator of the prevalence of this social issue in the country. The use of less impactful wording in reports, along with the prevalence of domestic violence in incident statistics, indicates that the bureaucracy does not recognize domestic violence the major social issue that it is.

Some amendments were made to the law on domestic violence, and also some additional rules were approved after the law was passed. However, despite the visibility of the normative legal acts that have been adopted, in reality, not much has improved in terms of the substance of the problem. For example, if police were involved in reconciling the disputing parties before the law was adopted, now this function is performed by local authorities - although, depending on the severity of the case, police can also get involved. According to the law, the key actions after the complaints are investigated is "to try to reconcile, to give advice, and hold regular talks." This means that for hundreds of women in the country who have been victims of serious violence (not only physical but also psychological) if they were victims of violence for the first time, may be forced to continue living in the same house with a person that may have perpetrated acts against them. The reason for this is that the government bodies see it as appropriate and recommends the partners to reconcile and live “friendly”.

The violation of a protection order in the West is a crime. In our country...

The results of the short-term enforcement order are to issue a warning to the perpetrator of violence, to conduct negotiations, and provide the victim with shelter. Violation of the short-term protection order may result in a long-term protection order being issued. How can one consider this regulation significant and useful, if such an order can easily be violated, with the sole consequence of extending the duration of the order? There are not any imperative norms, although the law does not rule out the possibility of the removal of persons who repeatedly commit violence from the families after a protection order has been issued. This means that even the decision of removing someone from the family can be based on biased considerations.

If we look at the experience of a number of foreign countries, we will not see any meaningless classifications called "short-term and long-term protection orders." The purpose of the protection order is to safeguard the victim by isolating them from the perpetrator of violence for a certain time period. It seems that the government is trying to blindly adopt international norms, without actually understanding the reasoning or meaning behind it, in order to decorate the reports.

The protection orders which have failed to make women feel secure are issued only after forcing the victims to jump through different bureaucratic hoops. For example, according to media reports, only 10 protection orders were issued in total in the entire period of 2012-2015. The statistics for 2017-2018 are not available to the public at all.

If we look at the practices of other countries (Germany, Great Britain, Japan, etc.), violation of protection orders is viewed as a criminal offense. In Australia, police have the right to detain a person without a court order when a protection order has been violated. In the US experience, women are given “press buttons”. When the buttons are pressed, the police will give an adequate response to the victim within 2-3 minutes.

According to Article 7 of the law, during the prosecution period, parties in dispute should be assisted with the normalization and restoration of family relationships, while ensuring the safety of the victim at the same time. By adopting this norm, law enforcement officials have attempted to “legalize” the right to reconcile partners when reviewing complaints about domestic violence. The cases opened under these circumstances are usually closed. This intention can seem good to a conservative person, but from a legal perspective, it is unprofessional. The duty of law enforcement bodies is not to provide psychological assistance, but instead to ensure the safety of the victim and prevent human rights violations. Safety cannot be ensured by helping the person who is accused of violence against his wife to reconcile with her and forcing him to promise that he won’t do it again.

Domestic violence is not addressed in family law either

Domestic violence is not considered at all among the acts that provide legal justification for separation or divorce of partners. That is, when reviewing the letter of complaint of the victim, the decision is generally made after extending the review process for up to 3 months. During that 3 months, victims without another place to live are forced to live together with the perpetrator of violence. On the other hand, even if the act of violence is accepted by the courts as a grounds for divorce or separation, payment of compensation to the victim is included neither in the Family Code nor in Civil Code. The fact that neither of the codes includes compensation guidelines is another major problem.

İnstances of women withdrawing their complaints have been widespread in Azerbaijan lately. This causes any investigation to end without any result. Ideally, investigations should be carried out to a conclusion, regardless of whether the complaints are withdrawn or not. For example, according to Article 55 of the Istanbul Convention, one of the obligations of a state that is a signatory of the convention (Azerbaijan signed but has not yet ratified the Istanbul Convention) is to ensure that the investigation of domestic violence is carried out in all circumstances. That is, even if the complainant withdraws her application, the case should be investigated and an objective decision should be made.

What is the committee doing?

The last hope for the victims of domestic violence in many cases is the regulatory institution that is executing government policy on the issue. The institution dealing with this issue in Azerbaijan is called the State Committee on Family, Woman, and Child Issues. Despite domestic violence being one of the main areas of function of the committee, the Committee has no authority over the investigation and decision-making on cases related to this issue. The committee also has no authority to issue protection orders or provide shelters.

There are some recommendations in the Committee’s databanks about solving this problem, which were created based on complaints from victims of domestic violence. For example, it has been suggested to establish the practice of a “family psychologist” and to strengthen “elder/guardian” practices. If the committee that is operating to ensure gender equality and protection of women sees the solution of the problem in establishing “elder/guardian” institute, then the problems are more endemic than previously feared.

Azerbaijan’s legislation does not protect the rights of women, and the law does not have any imperative spirit or preventative function. The intention to really address the issue can only be considered genuine if there are imperative norms, a transparent management system, and a less bureaucratic social protection system. As it stands, no matter how many actions plans the government adopts, civil servants and judges with conservative values that do not consider domestic violence to be an actual social issue will continue to hold sway over the entire legal process. If these people are not replaced and specialized courts are not established, we can not talk about genuinely effective measures that are meant to prevent domestic violence.