IN PRAISE OF EUROPEAN INVESTMENT BANK

18.07.2017 / EIB should know that there is no real development regarding execution of ECtHR judgment in my case 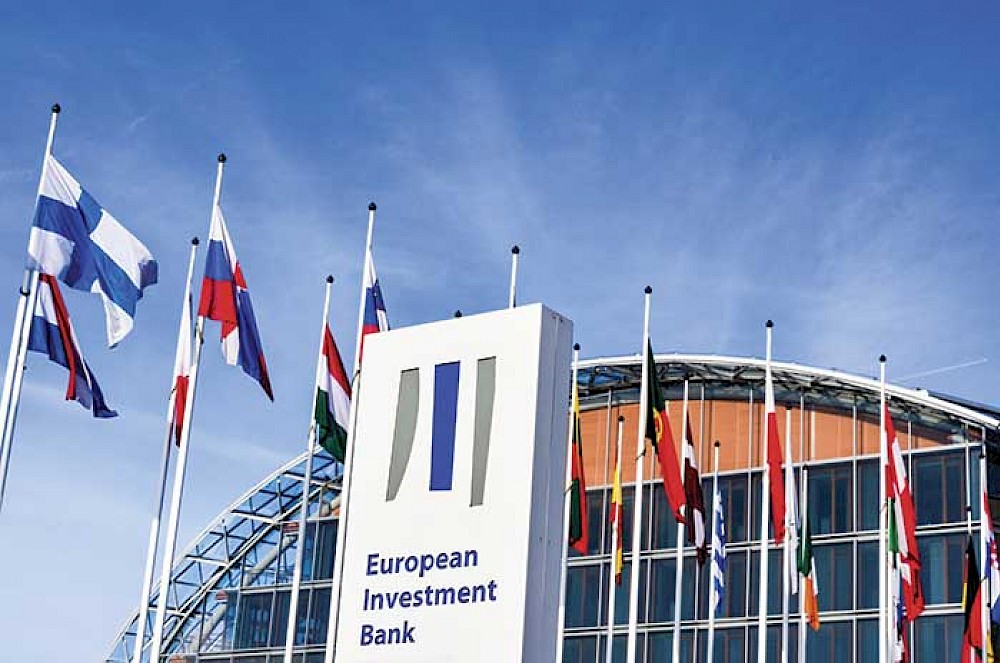 Of the four banks I had mentioned in my previous article for the global audience only one is busy dashing off an algorithm to connect in material terms, i.e. not in wishful thinking, the availability of funding for the oil and gas projects in Azerbaijan to judicial improvements in the country. That is one outcome of the expulsion of Azerbaijan from the Extractive Industry Transparency Initiative (EITI) in March 2017 following the issues I had raised in the article.

Whereas Mr. Chakraboti, the president of the Europen Bank for Reconstruction and Development (EBRD) openly questioned the EITI’s wisdom, thus indirectly advocating for the continued detention of critics of the government, and whereas the World Bank and the ADB approved their own loans without philosophizing on the subject, the European Investment Bank (EIB) is putting forward a mechanism fastened to our judicial performance. That encouraging news I heard recently from a reliable international source.

While praising the EIB, I can not condemn the other three banks. Their thinking is as justified as Mr. Patrick Hickey’s, head of the European Olympic Committee (EOC), in advance of the 2015 First European Games in Baku: the EOC should not be a greater champion of the rule of law than the Council of Europe (COE) and the OSCE – which both only routinely criticize some practices of Azerbaijan, but maintain an unrestricted, full-fledged membership profile for the country. One year after the Games Mr. Hickey was arrested in Brasil on corruption charges, but that is a different story.

The CoE and OSCE instruments of correcting the country’s course got stuck long time ago because right in the beginning the authorities had skilfully prioritized the task of getting – by hook or by a crook – a non-catastrophic election assessment from them. Theories have been built of “an institutional democracy versus the electoral democracy“ to justify the betrayal of the fundamental democratic exercise in exchange for bureaucratic programming.

For example, in 2010 Mr. Wolfgang Grossruck, an Austrian MP and the Head of the OSCE PA Election Observation Mission to Azerbaijan, not only made the critical assessment by the OSCE Office for Democratic Institutions and Human Rights (ODIHR) look controversial at the joint press conference of the missions, but even wrote a follow – up letter of complaint about the ODIHR to the then OSCE Chairman-in-office – foreign minister of … Kazakhstan. A year or two later Mr. Grossruck’s own parliamentary career ended in disgrace, but that is a different story.

In 2015, Mr. Jordi Xucla, a Spanish MP and the Head of ALDE group of the Parliamentary Assembly of Council of Europe (PACE) microscopic in size Election Observation mission to Azerbaijan, hailed the new parliamentary elections (to which no ODIHR observers were admitted anymore) as a genuine democratic choice of the people. Less than two years later, in March 2017, he flew to Damascus to express support to Mr. Bashar Assad – thus apparently ending in disgrace his own career at the PACE, but that is a different story.

The PACE and the OSCE PA election observation principles have been built on the premise that the ODIHR’s approach is “too technical” and those good observers should look at the “broad political picture”.

Aside from reserving a vast territory for subjective interpretations and accelerating the erosion of democratic institutions in Azerbaijan, the said “principles” are not copied to address the other pressing problem – of political prisoners: during my 4.5 years in jail the PACE has never adopted a document on my case. Only once and only in passing – in June 2015 – it expressed “concern” about the findings of the European Court of Human Rights (ECtHR).

Thus, according to the PACE, Mr. Aliyev’s electoral interests are an immediate matter of “broad political consideration”, while freedom of his critics is a “technical question” subject to slow courts and then – after judicial success – to years and years of procrastination at the CoE Committee of Ministers!

The CoE Committee of Ministers (CoM) has issued 11 quarterly (!) decisions urging the authorities of Azerbaijan to release me in line with the ECtHR findings. The authorities have been bluntly disregarding the decisions and instead broadcasting reports only on things like the conduct of PACE committee meetings in Azerbaijan and on other formal and ritual acknowledgments of respected membership as the true attitude of the Council of Europe to the Aliyev regime.

It is no surprise that the practical death of the OSCE and CoE protections against violation of human rights has compelled the EITI and the EIB to act on their own, i.e. abandon the convenient narrow approach to their public responsibilities.

As far as I know, the EIB has put a big question mark on the credibility of Azerbaijan’s judicial system given the refusal of the authorities to execute the ECtHR judgment in my case and, on that grounds, it is inclining to reject any credit allocation to the energy projects associated with the country.

Yet, I write this article because the EIB may still be deceived by the holographic motion picture of a fictional cooperation between the CoM and Azerbaijani authorities, which some interested governments and energy companies want to present as a reflection of a material thing. Let me explain.

“Who that damned individual thinks he is?”

As required by the existing rules, the first 9 quarterly decisions by the CoM (December 2014 – December 2016) had formulated separately the general measures (legislative changes and etc.) and the individual measure (my immediate release) the authorities must adopt in order to execute the ECtHR judgment. However, in March 2016, after visiting me in prison Mr. Pedro Agramunt, PACE President, publicly stated that no individual measure should be applied and that I should be released by a set of general measures instead. I immediately protested to the CoE staff such a compromise of the whole established approach.

The CoM continued insisting on the separate individual measure until March 2017 when its 10th quarterly decision put my freedom in a position dependent on the general measures.

Why did that happen?

That happened because those at the CoM who had always objected any punitive action against Aliyev regime had exhausted all their excuses: all previous quarterly decisions of the Committee – alongside with demanding my release “without further delay” – had always referred to the then ongoing review of my case by the Supreme, then Appellate, and then again by the Supreme courts. Those reviews the authorities had delayed unprecedentedly to buy time. However, on 18 November 2016, after the second judgment by the Supreme Court it became clear that the regime and its friends at the CoM need a big new excuse.

On 10-12 January 2017, two high-ranking officials of the CoE were finally admitted to the country I line with the unique action under the European Convention on Human Rights (the Convention) Article 52 initiated by the Secretary General Thorbjorn Jagland in December 2015. The visitors’ task was to obtain information on the intentions of the authorities regarding the ECtHR judgment on my case.

Results of the meetings those two gentlemen had conducted in Baku sent some international human rights groups into a jubilant mood: everybody was told that Ilgar will be released in counted weeks.

Simultaneously, the state-controlled media and GONGO people sent signals that I may be released by the regular 17 March presidential pardon decree. A CoM officer called my lawyer and asked him if he could send to the CoM a brief note about such publications. The lawyer was very smart not to do that because given the CoM addition pretexts for inaction I nearly exploded when I heard of the request. I immediately wrote a letter to the CoM (available on its website since presumably 2 March 2017) calling on it to ignore such excuses, particularly because of what the PACE Committee Chair Alan Destexe had told me on 15 February 2017 during his visit to my prison.

The human rights organizations’ joy was predictably pre-mature. On 10 February 2017 as part of the process agreed during the Article 52 Mission, Mr. Aliyev issued an Executive Order inviting government agencies to submit by 10 April 2017 their proposals on “humanization of the criminal punishment policy”.

The 10th CoM decision in March 2017, therefore, subordinated my release to the implementation of that Order. Thus, another quarterly opportunity to penalize the regime was wasted.

On 8 June 2017, the CoM – one can read in its 11th decision – was told that the “humanization package” will be reviewed by the supplementary session of parliament during June. The CoM readily swallowed that pretext for inaction, too.

As a result, Mr. Aliyev sent to the parliament “as promised” only one of the three documents of the package and only on 29 June. The last sitting of the supplementary session on 30 June had no time to adopt it. The Parliament broke up for summer holidays.

The first plenary of the autumn session will be held in October. Thus the September 2017 quarterly meeting of the CoM will also apply no punitive measure against Baku and will call on the autumn session of the Azerbaijani parliament to adopt the package.

In early December 2017 (the massive experience described above permits me to make this prediction) the regime and its friends at the CoM will assure the Committee that the package will be put to vote in Parliament before the New Year, i.e. technically during the autumn session.

That does not guarantee though any quick signing of the package in to force by Mr. Aliyev or my release as part of its implementation. The CoM itself has not seen the package yet, neither member of the rubber-stamp parliament has.

The authorities may respond to the EIB questions on the quality of our judicial system by referring to the “positive development” noted in the CoM 11th quarterly decision on my case. Probably the whole point of getting that phrase inserted into the decision was the access to the money which the EIB is reluctant to allocate. I want the EIB to know that in reality there is no process, no real development between the CoM and Azerbaijan regarding the execution of the ECtHR judgment in my case.

During the first 2.5 years after the judgment, the blocking minority of countries at the CoM (decisions are subject to 2/3 majority) has exploited one set of pretexts for inaction: the expectation of redress at local courts. Since March 2017 it invented another pretext: the mysterious “humanization package”.