350 HEROES OF THE REPUBLIC 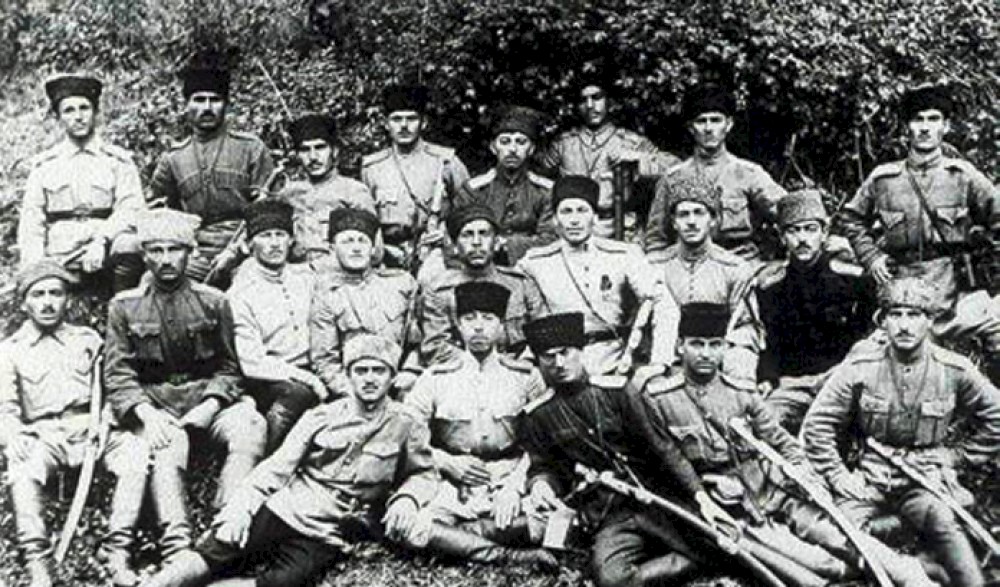 Every year before May first
I pin my faith on
For every upcoming May
April cries, I cry
(Ahmad Javad)

The 28th of April inaugurated the one-hundred-year occupation of the Azerbaijan Democratic Republic.

Everything started with me sharing a small excerpt from Arif Aliyev's novel, Yalama, on my Twitter account.

My post was as follows, "It is one of those historic days that we should be really proud of. Imagine 350 soldiers of the Republic faced 70 thousand Russian armies at Yalama station. All of them fell as martyrs. This sacrifice was made to extend the Republic's life for a couple more hours."

Within a short time, it spilled out across Twitter and went viral. More than one hundred pages and about one thousand people shared this post.

And do you know what was most surprising and regrettable in all this? The majority of people who shared and commented did not have any information about what happened. Many expressed their shock on how they could not have heard about this.

Independent citizens of the 26-year-old independent state do not know about one of the glorious days in their history. I have always tried to avoid making pompous statements. But this outstanding event, in terms of significance to the history of Azerbaijan, in my opinion, comes after May 28, 1918. Yet, we are not aware of this history.

I would like to take this moment and thank Arif Aliyev for documenting and transforming this historical event into the book. For the fact that he illuminated such a proud event for us.

Arif Aliyev's documentary novel Yalama tells the story of the battle that happened on April 27, 1920, on the territory of Yalama, between the XI Red Army and Quba regiment's Yalama garrison of the Azerbaijan Democratic Republic's National Army.

At 00:05 on April 27, 1920, the XI Red Army’s seventy thousand troops, including 300 infantry and three armored trains, led by the Third International, crossed the bridge over the river Samur. Anastas Mikoyan and Gazanfar Musabekov were among those marching with the purpose of establishing a Soviet government in Azerbaijan at the tip of Russian bayonets.

Led by the Quba regiment's officer, Agaali Babazade, a cavalry squadron and a small detachment of gendarmes of 300 people, and also two companies armed with several light cannons and machine guns were waiting for the enemy near the station.

In fact, the soldiers patrolling Yalama station did have a choice: surrendering to the enemy. The contending forces were clearly not equal, neither by the army’s numbers nor by the quality of military equipment. But the soldiers did not step back, deciding to protect the honor of the Republic for the last time instead. The battle lasted only two hours. By giving their lives, these 350 soldiers extended the life of the Republic for two more hours.

Ninety-eight years have passed, yet, one can find very limited information about the event on the Internet. Only one book has been written, and few other writings. Despite 26 years of independence, many people still think that the XI Red Army was welcomed by the people of Azerbaijan with flowers.

People often speak about defeats and losses. Nearly all the tragedies, mourning days are being discussed and promoted for weeks. However, nobody speaks about the day that could enhance the nation's self-confidence by revealing its proud history.

After 26 years of independence, the Soviet period's piles and piles of politicized historical chronology still decorate and fill our history bookshelves. They continue torturing poor kids with the enormous volumes on the Mannaeans, Lullubi or Gutian dynasty.

The President of Azerbaijan has signed a decree on the action plan in connection with the 100th anniversary of the Republic. It is already half of the year, and nothing notable has happened, besides the meetings held in auditoriums of the Binagadi, Yasamal, Kurdamir districts' executive power buildings. Instead, they could restore the ruins of the castle walls in Yalama, or build the memorial to the 350 heroes. A documentary movie could be made about the Yalama battle using those millions of manats they spend on the production of tasteless films, or ten thousand copies of Arif Aliyev's book could be published again. Nevertheless, it seems that we will not be seeing anything but the auditoriums filled with bureaucrats in ties holding meetings, the meaning of which they do not understand themselves. It looks like the version with people holding flowers and welcoming the Red Army is more suitable for them than the 350 soldiers who fought ‘til the last breath.