ON THE OTHER SIDE OF THE STONE WALL

10.01.2018 / Expenses of disabled people, who have taken shelter under the government, are covered under "internal opportunities," not from the state budget 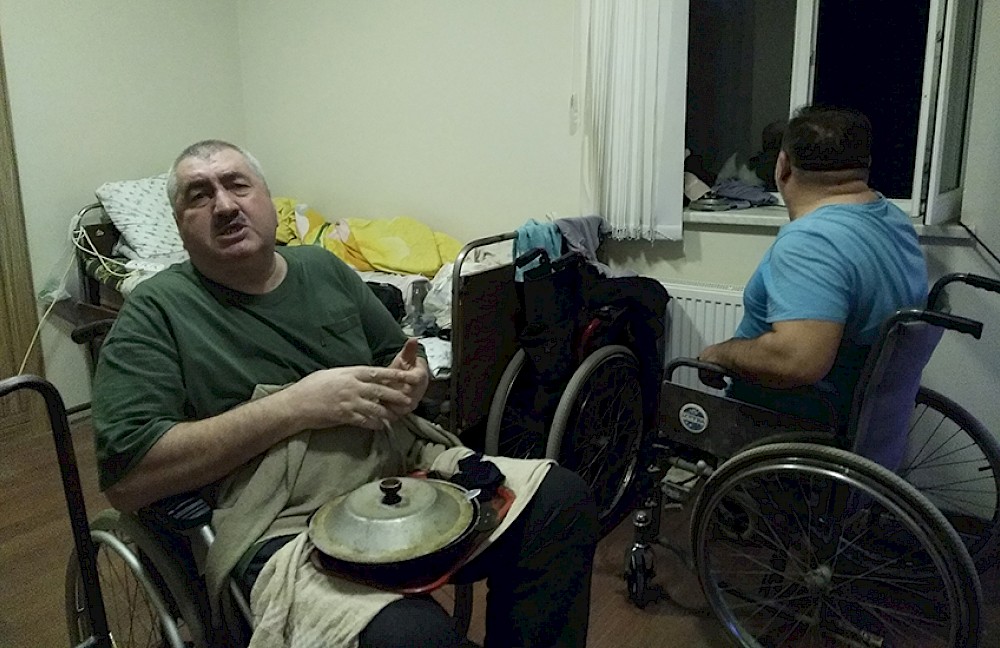 They are neighbors who share a wall in the home for the elderly located in Bilgah. The two-story dormitory built originally as an office building, which now serves as a shelter for people with disabilities of the 1st and 2nd groups (disability groups classification in Azerbaijan). One room is provided by the state's social protection, and some food that they receive on a weekly or monthly basis, constitute their ordinary life in the shelter. The benches and trees of the nursing house are situated far from the dormitory residents. It seems like some are embraced as natives, while others feel alienated. There is a handmade ramp in the threshold of one of the two neighboring rooms on the first floor. It is to hang the door frame.

"We have no social workers"

"We are struggling with using the toilet. It does not work and it is too narrow. Not to mention no space for wheelchairs. We have no social workers here, nor do we have an attendant or nurse. No one cares about us. We have been thrown out. Our president, or Mehriban Aliyeva, they do not hear us, they are not aware of our situation here. We have been put into ‘prison.’ Just look at the walls’ height, are there any higher than these?" says the shelter resident Sardar Mahmudov.

Sardar Mahmudov, who lost both legs as the result of an accident, used to stay in the nursing house starting in 2007, however, for the last few years, he has been settled in the dormitory. He is one of the 16 people with disabilities who took a refuge in the dormitory. Most of these tenants are persons listed with the 1st group disability.

"Emergency service does not come here, they simply cannot find it. There is a 1st group disabled person who lives in the next room, and often falls. The wheels of the wheelchair cling to the bathroom's door entrance. We cannot get up once we fall, so we have to call the director to come and help.”

Mahmudov, who gets a 170 AZN monthly pension, suffers from high blood pressure and diabetes at the same time. They settled people with different, incongruous types of disabilities next to each other. They share the same bathrooms and kitchen. Sometimes this may instigate an argument between them.

When asked for his consent to be shot on camera, he looked in a mirror. The room seems clean. But when you take a step you feel the dust. And the smell of sweat.

No washing machine and the refrigerator they bought themselves

"No one washes our clothes. We pay for someone to wash them. Before you go to the bathroom, you want to take off the clothes in your room, but you cannot. The environment here does not let you do that. It is very difficult, very hard for us. I receive an allowance of 170 manats, and my drugs are expensive."

The residents who work together to clean their rooms were provided with the kitchen furniture. Residents are settled in twos or threes, some married, others single. Conditions are the same for all. They got the refrigerator themselves and never received any TVs, washing machines or air conditioners. Although the wires for a conditioner have been set, there is no conditioner available. The residents say they endure unbearable heat in the summer.

One of the disabled of the 1st group put a small pan on his knees. He had just finished eating. Asked whether there is going to be a shooting and wanted to change the dirty shirt on him:

"I made it myself. I bring and take it on my foot. The last time the pan turned up and burned my leg. Where is it seen that a person with a 1st group disability cooks for himself? I have been here since January. Our president claims he is the number one servant of this nation. We cannot see any help from anywhere. Have a look at my bed, look at this dust in the room,” Mammadhuseyn Huseynov says.

Huseynov has a 1st group disability. He has a family but he rejected them in 2008.

Related to the issue, the Ministry of Labour and Social Protection of Population stated that the Mardakan Care House is closed for thorough repair. In order for the enterprise to fully stop its activities, the group of people with disabilities were moved out from the care house. But the ministry took care of their new living places. The two-story building, which is located on the social service organization' territory, was renovated with the help of the sponsor, and without allocations from the state budget, for those who have reached retirement age. It has been transferred for use of the people with disabilities (some live alone, the rest are married). Normal living conditions were created in the apartments. Since the building is not an actual social service enterprise, sanitary and medical services are not recognized in the legislation.

"Honestly, I am here in this house for the disabled for eight years, and I have not seen any treatment or vacations, nor have I seen parks or concerts. I get 140 manats, and do not know whether to spend it on bills, or cleaning materials. I also have not gotten any fruits. Thanks to some good people, on the International Day of Persons with Disabilities we are supposed to get 30 manats, and they want us to bring a paper for that. They could simply transfer it on our cards instead," Huseynov said.

"They were brought here by the police force"

Completely forgotten residents of the building say that sometimes they get to hear concerts, organized in the house for the elderly. Mammadhuseyn Huseynov says that no one is interested in them:

"I have been in Ramana since April, 7th 2010. Then, due to repair work, they transferred us to Mardakan. For two years we stayed in Bilgah. Those were my best days. After that, again because of repairs, they sent us to Mardakan. We stayed four more years in Mardakan. And this year, on January 22, they brought us here. They asked us to be patient and promised a care worker. We will be fine they said. They brought us here by the police force. To be honest, I did not want to come here. They cut our lights off, so we had to".

"I get 156 manats a month. I have had no money for three days now. They sell our travel tickets. I am disabled at the age of 27. I fell under the train," Ilgar Ganiev says, who is disabled of the 1st group. The ministry also commented on the issue of the allowance that disabled persons get on International Day of Persons with Disabilities, which is on 3rd of December:

"This one-time assistance is transferred to the plastic cards of these persons by district departments of the State Social Protection Fund, and so far no problem occurred in this area. Also, no one from the group of people has not appealed about a problem in receiving this allowance".

Ganiev, who has for years been waiting for an apartment, says that this issue is a general problem for all people with disabilities. The ministry, in turn, has stated that this general housing problem for disabled people is beyond their authority.

Huseynov spoke about his chance to walk again, and that his treatment does not go right:

"I want them to provide good conditions for me. Either they do that, or they better take me and shoot on the seashore. We are three people with disabilities living here in three rooms. One cleans after himself and one does not. But there is no one to help us with this, we must do for ourselves".

The ministry informed him there is social workers staff allocated for every district (city) from the respective department of the State Social Protection Fund, based on the number of people with disabilities living in that district. When citizens who need this kind of social service declare as much, their question is addressed in accordance with the requirements of the legislation on social services. And in case anyone from the mentioned building considers applying, the provision of the social service will be conducted in accordance with the legislation.

Residents of the dormitory receive their food in an opened form. They also get seed oil in one-liter juice bottles. There is no information about the producing company, nor about the expiration dates. On the fruit juice bottle, it is written: "Natural 1001". On the bottle, there are information on TIN [Taxpayer Identification Number] and address of the physical person named Javanshir Safarov. As a physical person, Safarov is registered in Shamkir and he is a simplified taxpayer of the tax department number 14.

According to the ministry's statement, food provided to people with disabilities acquired through the ministry's internal resources, as a humanistic aid, and the food passes quality control. The ministry has not responded to our question about the firm where this food is acquired.

The cook, Muhammed Abdullayev, says the composition of the oil should be investigated:

"If oil is collecting on sides when it melts, then it is a margarine. Some of the liquid oils tend to thicken. This particular oil is of that kind. These fatty oils are for frying and one-time use. They are not for all dishes. Liquid oil is also chemically produced. This kind of oil is usually used in hotels. It harms one's metabolism".

People with disabilities who were settled in Bilgah say they want to return to the house for the disabled in Mardakan. They had health workers, nurses, who helped them there. Where they were not isolated from the rest of the world with big walls.