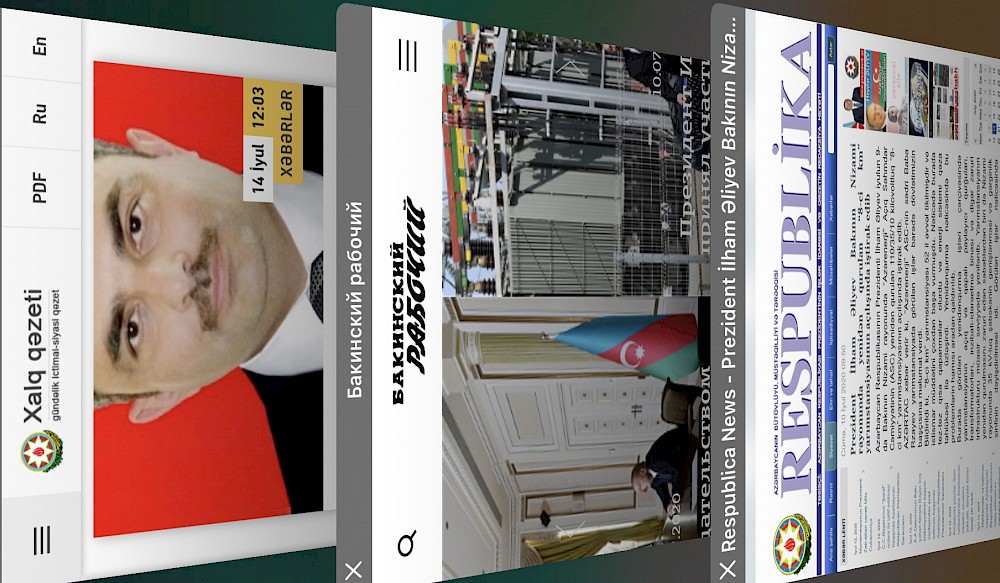 When was the last time you bought, paying 40 kopecks, for example, the newspaper “Bakinskiy Rabochiy” (“Бакинский Рабочий” lit. Baku Laborer)?

Nowadays, you can hardly find anyone who buys a newspaper from a kiosk. Readers receive news, interesting information either from the websites of newspapers or from news portals. Some newspapers did not withstand this environment, went bankrupt and closed, and others' circulation declined significantly. Talking about advertising revenue has become senseless: private companies have not placed advertisements in newspapers for 10-15 years. However, the state provides financial assistance to newspapers, and three newspapers have received millions in aid.

About 2 million AZN allocated from the 2020 budget to the “Khalq Qazeti” (lit. “People’s Newspaper”), “Respublika” and “Bakinskiy Rabochiy” newspapers.

Why does the state subsidize newspapers?

The founder of the "Khalq qazeti," "Respublika" and "Bakinskiy Rabochiy" newspapers is the Office of the President of the Republic of Azerbaijan. All three newspapers are published by "Azerbaijan" Publishing House. The publishing house annually receives many funds from the state budget under the item "Execution of state orders." Afik Valimatov, head of the publishing house's economics department, told Open Azerbaijan that although the funds were allocated to Azerbaijan Publishing House as a legal entity (TIN: 1300407191), the purpose was specific: to buy paper for newspapers of the President's Office. This money cannot be used for other purposes, such as paying salaries. According to Valimatov, the number of funds allocated from the budget is increased based on the editorial offices' request. They say that the volume of newspapers (the number of newspaper pages) has been increased.

If, in June 2014, the newspaper "Respublika" was published 6206 copies per day, since January 2018; to date, it has a circulation of 4292 (decrease - 30.9%). If in June 2014, the newspaper "Bakinskiy Rabochiy" was published in 4353 copies, today, the circulation has dropped to 2581 (a decrease of 41.8%). The circulation of the "Khalq Qazeti" has also decreased. It is doubtful to claim that the pages of such newspapers have increased. It is observed that the state newspapers are published on most days of the week on 4 or 8, sometimes 12, rarely 16 pages.

One of the evidence denying the increase in newspapers' volume is the decline in the volume of newsprint imported to Azerbaijan.

Newsprint has become cheaper, and imports have fallen.

However, the financial support provided to the publishing house is not commensurate with these figures. For example, if in 2014, 902,880 AZN was allocated from the state budget to the "Azerbaijan" publishing house, in 2019, this figure reached 1,705,440 AZN. Compared to 2018, funding increased by 13.7%. However, as noted above, the circulation of state-sponsored newspapers is declining.

On the other hand, as can be seen from the table below, the price of newsprint has fallen over the years. It should be noted that newsprint is exempt from import customs duties.

One of the noteworthy points is the lack of state control over the "Azerbaijan" Publishing House's financial and property situation. Simple evidence: the Chamber of Accounts has not yet inspected the publishing house, not once. There were no inspections to audit the use of state property or the expenditure of allocated budget funds.

Newspapers that cost more than the income

The management of the publishing house announced the financial results of 2018 to Open Azerbaijan. During the year, revenues amounted to 2.325 million AZN, and expenditures - 2.8 million AZN. At the beginning of 2019, the total loss of the state publishing house reached 6.1 million AZN. At the beginning of last year, the assets of the "Azerbaijan" Publishing House amounted to 24 million 855 thousand AZN (a decrease of 3.6%). Of this, 223.3 thousand AZN fell to the share of receivables.

Speaking of debts... About 80% of the useful area of the nine-story administrative part of the building of the "Azerbaijan" publishing house is used. According to the official statement, some of the tenant newspapers and magazines either do not pay rent or have difficulty paying utility bills. Utility bills are paid by "Azerbaijan" Publishing House instead of the indebted editorial offices.