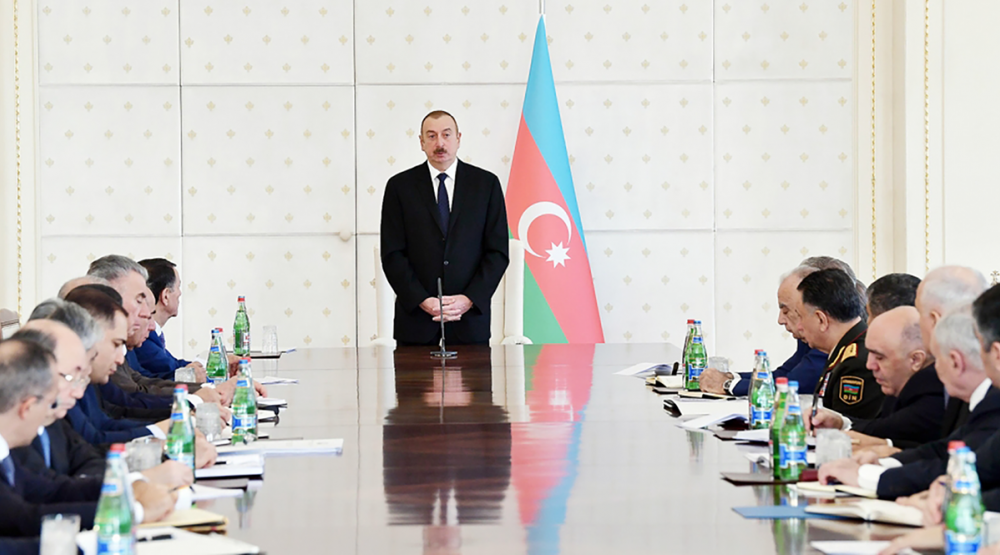 One of the topics on the public agenda in the first month of 2019 centered around structural reforms. This discussion began with a meeting of the Cabinet of Ministers. At that meeting, dedicated to conclusions and future challenges regarding socio-economic development in 2018, President Ilham Aliyev said, "Our governance structures are extremely bloated." President Aliyev noted that the opposite process is going on in the rest of the world right now, with governance becoming more concise, flexible, aim-oriented, and with less staff, while "in Azerbaijan, the governance system is bloated and this shall end." (We completely agree with this; in 2018 alone, 10 new structures financed from the budget were established: DOST, the Innovation Agency, the Copyright Agency, the State Tourism Agency, the SMB Development Agency, the State Agency for the Use of Mineral Raw Materials, the Public Legal Entity on Monitoring Center within the State Language Commission of the Republic of Azerbaijan, the Financial Monitoring Service, the Support Fund for the Azerbaijani Diaspora, the Agricultural Research Center, and so on). As a result, the President announced the initiation of "structural reforms". The meeting was held on January 11, and by January 14, the first decree on reforms was signed.

Which state agencies were abolished?

Before talking about the decree, it is important to note that, in order to carry out reforms by maintaining any system in the country, it is necessary to formulate a thorough and detailed plan. Such planning works were held back in 2015-2016. However, no serious changes were made at that time, due to budgetary cutbacks; nobody wanted to accept cutbacks because of the financial crisis.

The current economic situation is a bit different. It is true that economic growth is not taking place, but it is also not shrinking significantly either – the stagnation continues. Under such circumstances, the government should endeavor to reinvigorate the market. Cutbacks in state structures can help this, but it is clear that the current structural reforms are going on without a clear plan in mind.
Per the January 14 decree, the following state structures were abolished:

1. the State Agency on Alternative and Renewable Energy Sources;

2. the Knowledge Fund; and

In addition, a number of structures would no longer be funded by the state:

2. the permanently operating Working Group of the State Committee on the Fight Against Drug Addiction and Illegal Circulation of Narcotic Substances;

3. the working group of the State Commission on Captive, Lost, and Hostage Citizens; and

4. the Secretariat of the Tariff (Price) Council.

Some transitioned to a self-financing system:

1. the Fund for Development of Science; and

Thus, 9 structures were left without state financing after a single decree. It is interesting that in the draft budget adopted a month before, the 2019 budgets of these structures had been confirmed and 14211.2 thousand AZN was allocated to them.

What will happen to the money allocated to abolished structures?

On the same day, the Ministry of Defense Industry was abolished and Azersilah OJSC was established in its stead. This now-defunct ministry had been slated to receive 11154.3 thousand AZN from the 2019 state budget. It is unclear how this money will be spent now. The new company's structure document has not yet been approved, but it is known that it will be directly dependent on the state budget. Under such circumstances, changing the structure's form would serve the sole purpose of making it a more streamlined and efficient organization (there is a big difference in the structure of the state body and the stock company).

Some reforms were made in agriculture, as well. By merging four government structures -

1. the State Phytosanitary Service within the Ministry of Agriculture;

3. the State Service on Registration of Plant Types and Seed Control; and

– the Agriculture Services Agency was established within the Ministry of Agriculture. It is interesting that the aforementioned 4 structures had 86 employees, while the Agency that conglomerated them now has 85 employees. It means that while the number of state structures has decreased, the number of employees did not - which was one of the main goals of the restructuring. By the way, the 4 former bodies had been allotted 32990.9 thousand AZN from the state budget, which will now be shifted to the single structure.

On the following day, January 15, a decree was adopted in connection with the Ministry of Culture. This time, the first sentence of the decree was shocking: "All libraries under the Ministry of Culture of the Republic of Azerbaijan shall be abolished." In Azerbaijan, there are officially no other libraries (if we do not count those within schools). Therefore, this decree was understood to essentially be abolishing all libraries. In practice, the "establishment of a modern library system covering the whole country" is envisaged. Why would one need to first abolish libraries for this? This was left unexplained. It is possible that these sweeping changes would encompass little more than a name change for existing libraries. This is the only outcome that makes even a modicum of sense out of this decision

The structural reforms went on for a few more days. On January 16, changes were made to the structure of the Ministry of Environment and Natural Resources. According to these changes, based on 19 structures within the ministry, 3 services and 1 service were established. The State Agency on Geodesy and Cartography, with a 4 million AZN budget, was abolished and its functions transferred to the Ministry's apparatus. The Baku Cartography Factory was also transferred to the Ministry. Together with its 13 various structures, the ministry (including the Zoological Park) were all abolished.

In the decree adopted on January 17, another interesting point is found. The annual maintenance budget for the Ministry of Transportation, Communication, and Advanced Technologies shall be directly proportional to the number of dividends paid into the state coffers by its structures. These subsidiary structures include Aztelekom LLC, Azermarka LLC, Baku International Trade Port, and Baku Taxi Service LLC, amongst others. Up until then, they had never paid dividends into the state budget (apart from a few isolated cases, there had never been any mention of profits whatsoever). In practice, other state structures overseeing state companies could also be governed under such a system.

Another point of interest is an order connected to the preparation of suggestions for reforms of "law-enforcement and military structures.” In Azerbaijan, these structures have always been immune to reform. The Presidential Administration has been ordered to prepare relevant suggestions within 3 months. Within 6 months suggestions for the scientific research system should be prepared. Along with that, there have been some small changes in the Ministry of Labour and Social Protection, the Ministry of Youth and Sports, and the Ministry of Education.

The main purpose of all these changes is to help regulate the state governance system. But if this raft of changes is about merging a number of government structures into single structures, unfortunately, a decrease of employees does not seem to be a priority. It is unclear how so many employees who are now (as a result of the combinations of formerly independent offices) performing redundant tasks will be financially sustainable. During the conference on conclusions from the implementation of the State Program on Socio-Economic Development of the Regions in 2014-2018, President Aliyev said, "The structural reforms held in the state ministries will not lead to workplace cutbacks. The state structures have already been informed about this." As proof of this, security guards for Azerenerji OJSC, who had lost their jobs as a result of the changes, were recently reinstated based on the President's order.

This means that one of the biggest problems of our economy – the bloated workforce in state-sponsored offices - will not be solved this year, either. According to official statistics, out of 1553.6 thousand contract workers in the country, 888.1 thousand work in the state sector. It seems that this number is not going to decrease - indeed, it might even increase.