HAS THE SITUATION FOR THE MANAT NOT CHANGED IN THE EYES OF THE CONSTITUTIONAL COURT?

24.09.2018 / Unlike the legal norms, the economic interests of the ruling elite are inviolable in Azerbaijan 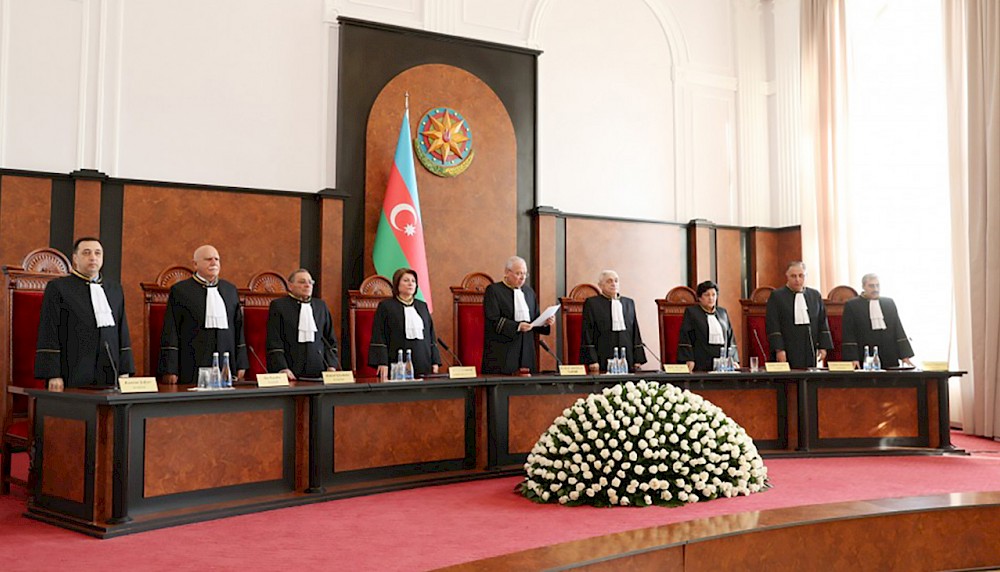 Devaluations on 21 February and 21 December 2015 led to the bankruptcy of tens of thousands of people, who had taken loans from banks. The manat, whose value dropped from 1.70 to the USD to 0.78 5, surrendered against it without any negotiations. Fairy tales about stability, a strong national currency, and is the region’s leading state with a strong economy are over. The governing oligarchy rescued its banks, at the cost of forcing hundreds of innocent citizens into destitution.

The judicial power, which has transformed into the deaf slave of the executive power, brought the financial crisis of those who took loans back onto the agenda.

Despite this, even these hostage-judges started to understand that this could not go on for much longer. The insults being hurled at them on a daily basis in their courtrooms forced them to appeal to the Constitutional Court to put an end to this abomination. The courts cited the “conditions changing significantly,” in order to use the last opportunity to save the drowning population from this quagmire. No matter what, “the supreme body on constitutional fair trials” could not have made any other decision!

Authors of this adventurous attempt forgot one small nuance – the Constitutional Court cannot make decisions outside of its constitutional jurisdiction. Unlike legal norms, economic interests are inviolable; the bank sector is the cardiovascular system of the government and no one has the right to interfere with the nutrition source of this system. Stability in the country precludes any changes in the conditions. The Constitutional Court cannot claim that there has been a change of situation with regards to resolute stability.

That is what happened – the Constitutional Court solemnly declared that the circumstances surrounding the manat, which has risen - to be more precise, dropped - from 0. 78 to 1. 70 and reached the point of degradation, has not changed. Not even smart businessmen, even our clairvoyant people with high economic, legal, and astrological knowledge should have felt that there was devaluation in the air. People, who feel the love in the air, should not have difficulty finding this feeling...

The situation of Law and Court

This is not a time to joke around, so let us talk about law a bit.

It might seem like sadism against the victims of those loans to talk about law in such a stable and unchanging situation, but we do not have another option – I am not the one to blame for this suffering. Sometimes people suffering because of this can thus find some consolation.

Article 422 of the Civil Code is dedicated to Contract Amendment and Dissolution in Connection with Significant Change of Circumstances. According to Article 422.1: “Significant change of circumstances, which the parties accounted for in the course of entering into a contract, can serve as grounds for the amendment or dissolution thereof if nothing otherwise is stipulated in the contract or results from its contents. The change of circumstances shall be deemed significant if they have changed to such an extent that, if the parties had been able to reasonably predict them, they would not have entered into the contract, or the contract would have been made under significantly different terms”.

I believe that this legislation should be very clear, not only to the Constitutional Court judges but also to any citizen with a school education: if a person knows that he would have to pay the loan s/he took for 78.5 cents for 1.70, s/he would never have done it. Second, if such an event occurs when the circumstances in connection with the signing of the agreement and its execution have significantly changed, the agreement can be changed or abolished based on mutual agreement. If a mutual agreement is not possible, then the court can unilaterally change or abolish the agreement. When an agreement is amended, the obligations of both sides change, as well. Likewise, when an agreement is abolished, the obligations of both sides are abolished, too; in addition, expenses in connection with its execution are to be fairly divided between the parties involved. The court decision determines the consequences of the ending of an agreement.

The issue is as simple as this.

Those who Slander Circumstances

Since the arguments of the Constitutional Court are not known, we can delay the dispute with them for later. Let us first talk about this notorious “significant change of circumstances”.

In civil law, these terms are called evaluative terms. When examining concrete cases, summarizing court practice, and interpreting the laws, the essence of these notions are clarified. Judges often refrain from defining these concepts and explaining them during their application in the court practice, where the rights of a judge are in terrible condition. But it is impossible not to use the following terms, especially in the civil law - such as "reasonable timeframe", "reasonable assessment", "reasonable measure", "reasonable actions", "simple", "honest/dishonest", "fair/unfair", valid/invalid", "immediate", "necessary", and “important", all of which are abstract and can have different meanings in different contexts. Therefore, as participants of the civil circulation, the court must deal with these terms, whether it wants to or not, and is obliged to give them a more specific and concrete definition.

I have witnessed on numerous occasions that significant change of circumstances has been taken into consideration when resolving disputes over loan agreements. Sometimes, the resolution resulted in the agreement being amended or abolished in line with Article 422 of the Civil Code; other time, I have witnessed circumstances, which were considered force-majeure. Banks take force-majeure into consideration only for themselves, in order to set stricter rules for the other party in the agreement. In case of the absence of a fair trial, the weaker party in the agreement – the side which took the loan - does not have the power to fight against it.

A significant change of circumstances differs from fo rce-majeure situations.

A significant change of circumstances is, first of all, the development of circumstances differing greatly from the circumstances, under which the agreement was originally signed. Second, it creates a new agreement situation – had the sides had a reasonable opportunity to foresee this change in advance, they would have signed the agreement under significantly different terms or would not have signed it at all. Third, this is a subjective-objective category; such a circumstantial development does not depend on the will of the sides, but the sides can make a decision on signing or not signing an agreement. But the opportunity to see it in advance should be realistic.

Force-majeure usually envisaged natural events – earthquakes, floods, storms, tornadoes, avalanches, and so on. But public events such as military operations, strikes, long-term mass events, decisions of authorized government structures (for example, the declaration of a moratorium) can also be considered force-majeure. Force-majeure situations are emergency and unpreventable events. Therefore, the blame cannot be placed on a responsible party 's actions in force-majeure situations; hence there is no causal dependency between his/her actions and the result. Accordingly, an individual's responsibility is excluded as a possibility.

A significant change of circumstances may not depend on force-majeure events. It is unsubstantiated to claim that an ordinary citizen could have foreseen the devaluation, which was made by a decision of the Central Bank, without informing the public in advance and against a backdrop of propaganda about economic and monetary stability. Moreover, the signing date of a loan agreement is very important – numerous agreements were signed before it was possible to predict the devaluation and its sides could not have foreseen that the circumstances would change so drastically. Especially agreements signed directly before and after the manat entered the regime of the floating rate should be judged by a different standard, along with any agreements signed during economic and monetary stability and in times of inflation. These two sets of circumstances cannot be approached in the same manner.

The World and Us

In various countries, opinions on whether to consider the severe devaluation of currency a significant change of circumstances are not unequivocal. The German courts consider the elimination of the justification of an agreement resulting from a significant change of circumstances will lead to a distortion of equivalence of the obligations for the sides involved and makes it impossible to achieve the aims of the agreement.

A drastic devaluation of a currency, the development of serious difficulties for the indebted side to fulfill the obligations of an agreement as a result of a significant change in the market, the application of new taxes or tax rates, customs duties, or restrictions on business activity are just some of the possible causes of a significant distortion of equivalency.

In general, it is possible to predict fluctuations in currency rates. But, in the practice of the majority of countries, drastic inflation is considered a significant change of circumstances.

By keeping the right to dispute the arguments of the Constitutional Court, I shall first say that this decision was not in line with the law. The Constitutional Court struck a significant blow to its own reputation and respectability. This decision was not about a fair trial or supreme constitutional proceedings. This is a political decision made under the orders of bank owners forces closely linked with the political authorities. This is a verdict against the law, and orders the bankruptcy of the indebted.